History. Once the drama course was established in Kinsale college in 2000, it quickly became clear that there was a problem with performing spaces. The college doesn’t have an assembly hall, and none of the classrooms were big enough to hold an audience. Initially, the drama course rented out the Town Hall, but this was unsatisfactory, for reasons of finance and availability – not least, the Town Hall wasn’t a very suitable space for theatre. This venue has since been closed, 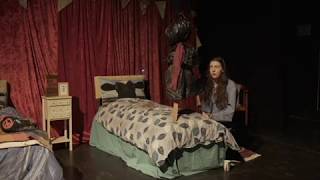 Something about Jessica, a devised play by Kinsale College second years.

Filmed by Jakub Walutek in the Stack Theatre Cork, something About Jessica was devised in 2015. Since 2014, Kinsale College Drama department has been pioneering a dynamic and revolutionary way of devising plays. In the past three years alone it has created 10 new plays, each of at least an hour’s duration, and each completely unique and original, demanding a variety of stylistic approaches in the staging. Designed to provide acting students with the tools to take more control

Check back soon
Once posts are published, you’ll see them here.

Check back soon
Once posts are published, you’ll see them here.